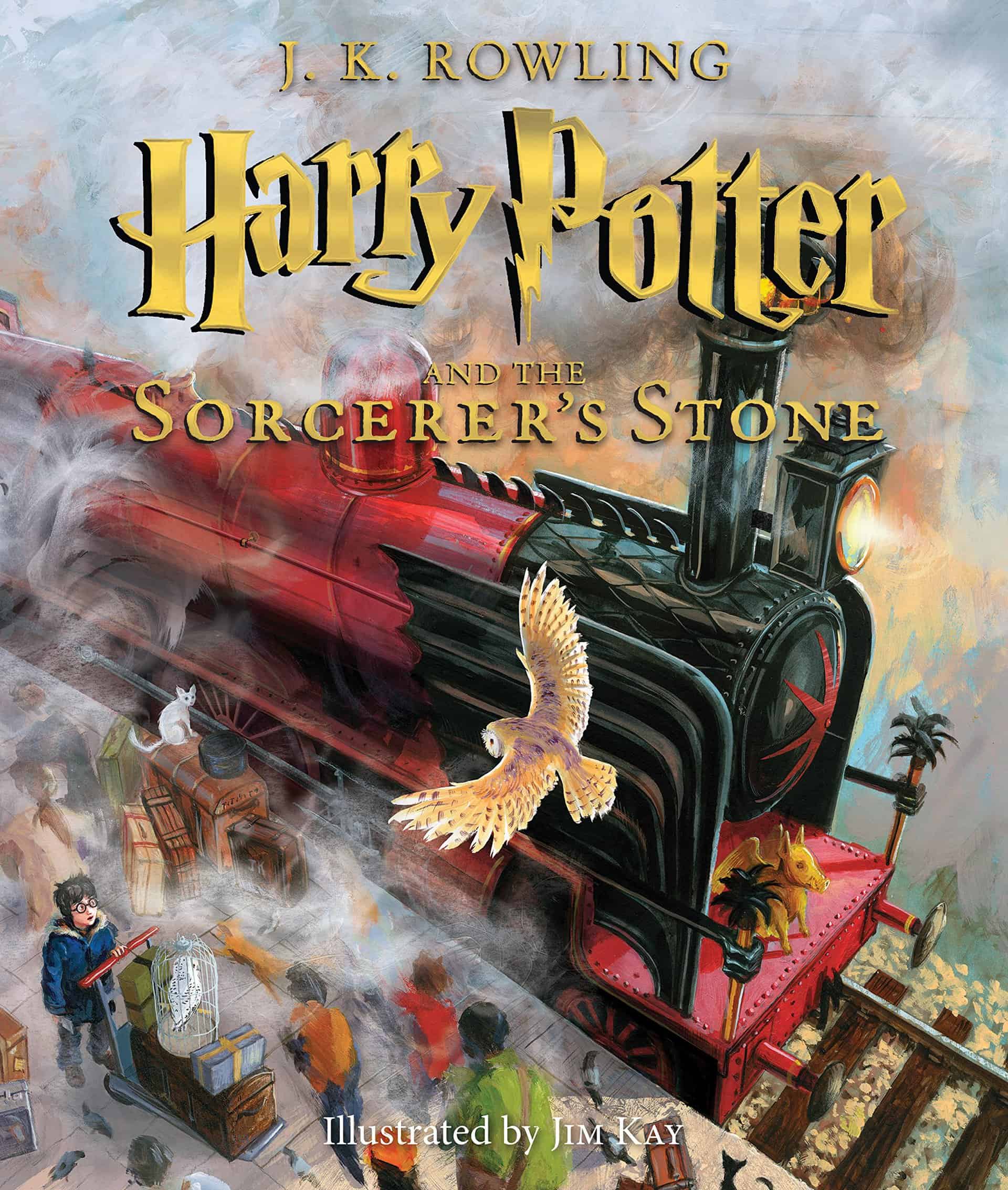 The Harry Potter series is comprised of 7 parts, which follows a story of a young boy named Harry Potter and his adventures. Primarily written for kids, this book series is cherished by adults as well. It is one of the famous book series around the world and for a very good reason – Anyone can enjoy reading these books.

The story follows an 11-year old boy, Harry Potter. He has been treated abusively by his aunt and uncle, Vernon and Petunia Dursley, and bullied by their son Dudley since the death of his parents ten years prior. This changes on his eleventh birthday, when a half-giant named Rubeus Hagrid delivers a letter of acceptance into Hogwarts School of Witchcraft and Wizardry after Vernon and Petunia destroyed previous ones.

Harry learns his parents, James and Lily Potter, also wizards, were murdered by the evilest and powerful dark wizard, Lord Voldemort, and so Harry was sent to live with the Dursleys as a baby. Voldemort lost his powers after failing to kill Harry, forcing himself into exile and making Harry famous among the hidden magical community.

On the way to school on Hogwarts Express, Harry befriends Ronald Weasley and Hermione Granger. And thus beings his first year of school.

Rowling is one of the best writers in the fantasy genre. She has effectively created a truly magical world in young minds. The story always captivates the readers. May that be a made-up game of Quidditch where teams have to score a goal on flying broomsticks or Diagon Alley, a hidden London street filled with magical shops, we feel that we are always with the characters. The character development is flawless, the story is engaging and very enjoyable.

This first book – Harry Potter and the Philosopher’s Stone – introduces you to this magical world for the first time, and it does so smoothly and comfortably, introducing both you and Harry to strange wonders never yet experienced. This makes the transition into the world of magic an easy and pleasant experience. Rowling has built a strong and multi-layered world with immense amounts of detail, yet it is written in such a way that it doesn’t feel tedious or as though you are being fed all the information at once, as is the case with many fantasy novels. Through Harry’s eyes, you encounter wands, monsters, and spells with their magical properties, purposes, and history laid out in small, easily consumable chunks. This means that the book never ceases to envelop you in its world or characters, whereas many epic fantasies have a habit of pulling you aside in a rather obvious fashion and indulging in the rather fruitless exercise of explaining every newly encountered item.

All the characters, teachers, students, and bad guys alike have truly believable personalities, eccentricities, and flaws, which, more often than not, helps to make them the truly lovable and long-standing characters that they have gone on to become. These friendships and relationships drive the book forward, providing comical respite and emotional engagement along the way.

There are characters in this book that will remind us of all the people we have met. Everybody knows or knew a spoilt, overweight boy like Dudley or a bossy and interfering (yet kind-hearted) girl like Hermione. A large number of the younger readers will also be able to easily identify with Harry, especially with his initial feelings of isolation and not belonging, and then through to his excitement at finally leaving that life behind in favour of one where he belongs and will be happy.

J.K. Rowling should be commended for getting so many people reading and excited by books. The biggest surprise must be the effect that this novel had on the adult population, both male and female – at the time the books were published many a commuting train was spotted with Harry Potter books providing world-weary workers with a wonderful sense of escapism.

Harry Potter is an orphan described as a scrawny, black-haired, green-eyed, and bespectacled boy who didn’t know he was a wizard. The only one who lived Voldemort’s attack on him and his family. Voldemort is an evil wizard in the series, and Harry the protagonist.

Ronald Weasley is Harry’s age and his best friend. His loyalty and bravery in the face of a game of Wizards Chess play a vital part in finding the Philosopher’s Stone.

Hermione Granger, the daughter of an all-Muggle family. Hermione is very logical, upright, and a good student. Despite her nagging efforts to keep Harry and Ron out of trouble, she becomes a close friend of the two boys after they save her from a troll.

Even though the story mainly revolves around the above characters there some characters worth mentioning are given below.

Professor Albus Dumbledore the headmaster of Hogwarts, and thought to be the only wizard Voldemort fears.

Professor Quirrell is a stammering and nervous man who teaches Defence Against the Dark Arts. Quirrell wears a turban to conceal the fact that he is voluntarily possessed by Voldemort, whose face appears on the back of Quirrell’s head. He is the antagonist in this book.

Rubeus Hagrid, a half-giant fiercely loyal to Dumbledore and quickly becomes a close friend of Harry, Ron, and Hermione.

Draco Malfoy is an arrogant boy and despises anyone who is not a pure-blood wizard. His parents had supported Voldemort, but changed sides after the dark wizard’s disappearance,

Professor Severus Snape is a teacher at Hogwarts School. He favours pupils in Slytherin, his own House, and seizes every opportunity to humiliate others, especially Harry. Initially coming off as a villain, this character’s development in the series is very interesting.

Harry Potter and the Philosopher’s Stone is the book that started it all. The book doesn’t reveal any more secrets of the wizarding world than it has to. This book offers an escape to the mysterious world of sorcery filled with wizards and magic. Kids and adults alike love this book. One will surely get hooked on the series after reading this book. And that should be enough to summarize this book.