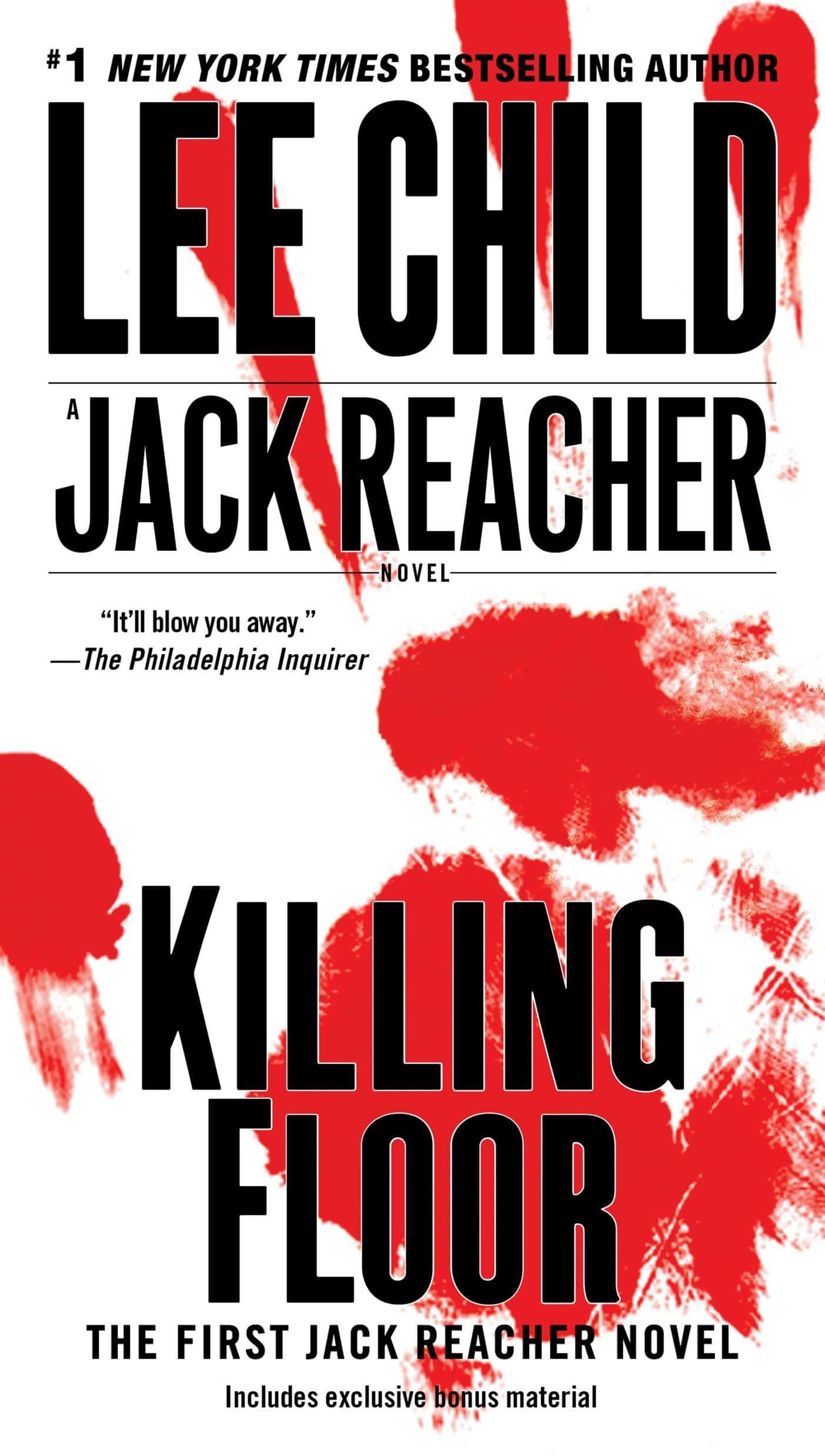 Jack Reacher is a fictional protagonist of a series of novels and short stories by British author Lee Child. Killing Floor is the first novel that features the character of Jack. A former major in the United States Army Military Police Corps, Reacher roams the United States taking odd jobs and investigating suspicious and frequently dangerous situations. Anyone with a love for a thriller-crime novel should definitely read this series.

Jack Reacher, a drifter, and ex-military policeman get off a Greyhound bus in the town of Margrave, Georgia. He remembers his brother mentioning that a blues musician named Blind Blake had died there. To his surprise, shortly after his arrival, he is arrested in a local diner for murder on the orders of the sheriff, Morrison, who claims he saw Reacher leave the scene.

While in custody, Reacher meets Finlay, the chief of detectives, and Roscoe, a female officer who believes him to be innocent. Reacher persuades Finlay to call a number on a piece of paper found in the dead man’s shoe.

The number leads them to Paul Hubble, a retired banker who instantly confesses to the murder. Before Reacher can be released, he and Hubble are transferred to a state prison in Warburton, where Reacher manages to thwart an attempt on their lives by the Aryan Brotherhood. Suspecting that the deputy warden set them up, Reacher joins Finlay’s investigation, while Hubble is presumed dead after vanishing from his house in the middle of the day. Who was accused of the person Jack supposedly murdered?

Reacher learns that the murdered man is his brother, Joe, who was running an investigation into a counterfeiting ring operated by Mr. Kliner and his son under the protection of several dirty cops, the corrupt mayor, Grover Teale, and Morrison. Can Jack bring down the people behind his brother’s murder and bust the ongoing corruption racket?

Killing Floor is captivating for various reasons. Reacher is far more talkative in his debut and early days than in his recent novels. He is more excitable and prone to moments of fear. But he hasn’t quite been moulded yet; Lee Child is still working out the kinks in his character’s traits into the protagonist readers cherish. But entanglement of characters, subplots and narrative of the story are highly entertaining.

In addition to his fighting skill, Reacher observes his surroundings in a meticulous and detailed way. Hence, the reader can see the picture he is painting. The house with the front door staved in, the motel room where he takes detective Roscoe for safety, the area under the highway where he hides to observe a suspect warehouse, the hobo whom he almost doesn’t notice. Even the cars in which he travels are described in detail and become an important feature of the solution. In this regard, the reader is required to concentrate. Nothing makes sense without the detail. This provides an immersive experience to enjoy the novel more.

The plot slowly unravels, maintaining suspense right to the last page. The crime has real substance, not only involving a huge array of characters, but also raising awareness of financial arrangements, and dark motives of people in power. There is not a clue out of place and the unravelling of the crime occurs steadily and carefully, making sense at each new step.

Reacher is the narrator and so his thought processes give an eye to his psyche. He has a very logical, analytical mind, and so it is enjoyable for readers to travel with him working out what is going on at each stage.

The novel ‘Killing Floor’ is written in the first person from Jack Reacher’s perspective. It is a straightforward read. It makes for a great storytelling tool because readers have the same information as the protagonist. In a way, one is solving the mystery behind the murders with him.

Due to one of the genres of the novel which is action, readers should expect violence of broken limbs, mashed-in faces, blown-up buildings, and very-dead scumbags, as the plot moves around solving mysteries. Reacher doesn’t have an alcohol problem, or domestic issues or any other of the plethora of baggage one has gotten used to in crime fiction. Some argue this makes for a one-dimensional character, while others seem to enjoy Child’s novels due to that. Some reviewers complained that the author wasn’t technically accurate about weapons, procedures, and other things. But others have argued that this is a fiction novel. It’s entertaining and filled with good action. Some incidences feel too coincidental. Jack’s ability to guess someone’s alias and location, feel too far-fetched.

The novel has an adaptation of the new Sherlock Holmes feel to it. Child’s amazing writing is deemed very engaging, as is evident with the awards he received for this novel. One should read this novel for the emotions displayed through the characters and fascinating action scenes.

Reacher is a former U.S. Army Military Officer who is currently wandering around the United States, visiting places he had only heard about while he was growing up. By choice, he has no possessions. He has a strong sense of duty to do the right thing, which causes him to become involved with people in need. He is a natural loner who shows little interest in any kind of long-lasting relationship with anyone, preferring to always keep moving. In this novel, he stumbles upon the town of Margrave, and being accused of murder on his first day, puts him in a tough situation from the beginning.

Sergeant Baker is a member of the Margrave police force and is one of the first on-scene to apprehend Reacher who was under suspicion for a recent murder. Officer Roscoe, a female officer who believes him to be innocent and a member of the Margrave Police Department. Paul Hubble, a banker who confesses to the murder of Reacher’s brother, and is subsequently killed. Later, one finds out that he is working for a counterfeiting ring operated by Mr. Kliner and his son KJ Kliner.

Other characters such as Assistant Warden Spivey, Mayor Teale, Agent Picard, and Hubble Family help to drive the plot forward. Overall, the characters are interesting, as are their motives.

Killing Floor is an amazing read for the weekends. It has got drama, action, suspense, fights, and an engaging storyline. It is the first of many Jack Reacher novels that came out subsequently. This novel is a place where it all starts; one shouldn’t miss out on reading it.