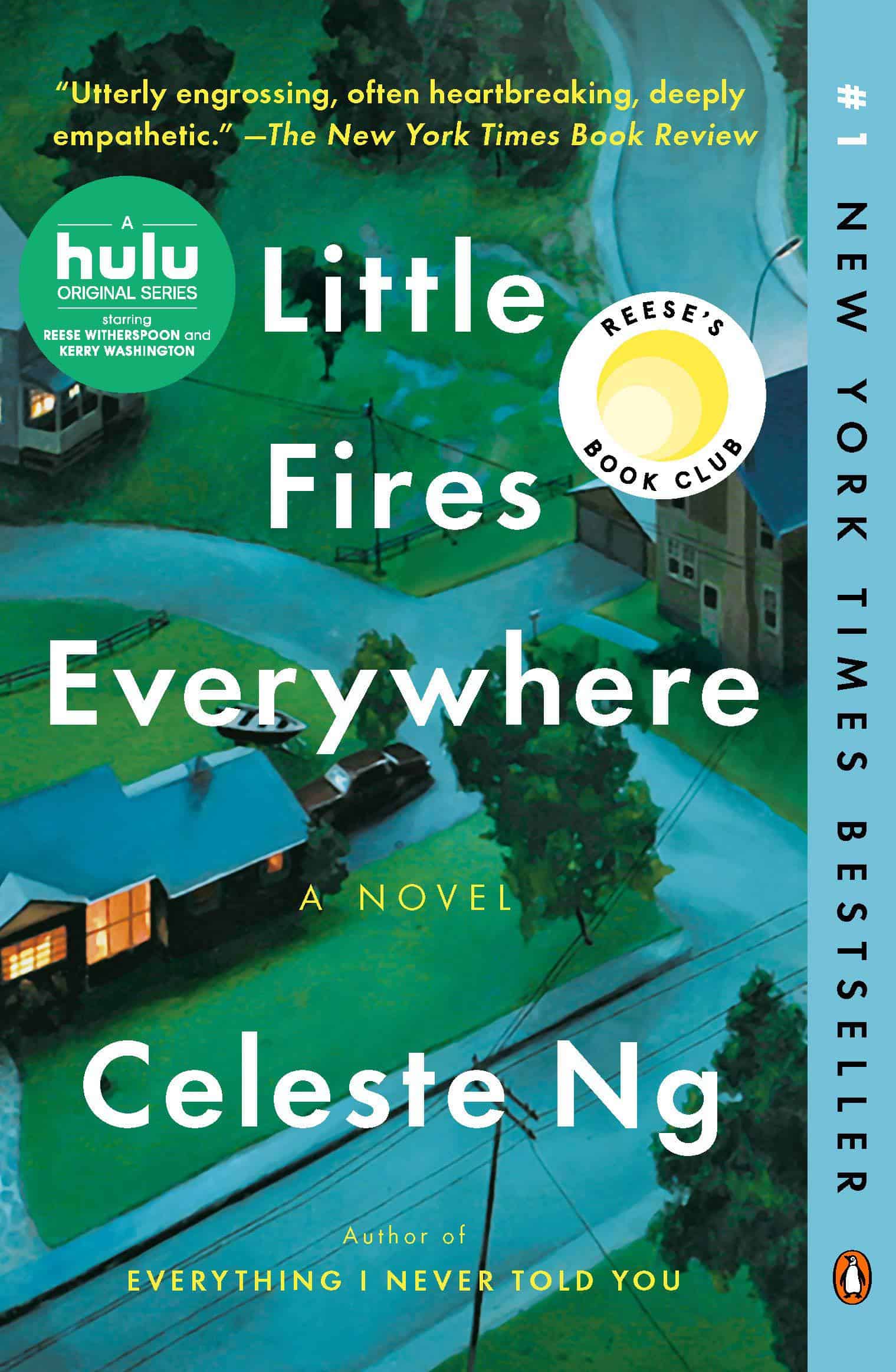 The novel ‘Little Fires Everywhere focuses on two families living in 1990s Shaker Heights who are brought together through their children. It is a story filled with chaos and secrets. So, those who fancy a little bit of dysfunctional family and the drama that ensues them should definitely give this book a try.

It is 1997 in Shaker Heights, the suburban community where the Richardson family lives. Mrs. Richardson works as a local reporter, and Mr. Richardson is a lawyer. Their four children Lexie, Trip, Moody, and Izzy attend high school. The story begins with the house on fire, and Izzy, whom the others suspect of setting it, has disappeared. The story then shifts to eleven months earlier and reveals all of the events that led up to the fire.

In Shaker Heights, a placid, progressive suburb of Cleveland, everything is planned. From the layout of the winding roads to the colours of the houses to the successful lives, its residents will go on to lead. And no one embodies this spirit more than Elena Richardson, whose guiding principle is playing by the rules.

Enter Mia Warren, an enigmatic artist and single mother, who arrives in this idyllic bubble with her teenage daughter Pearl, and rents a house from Elena Richardson. Soon Mia and Pearl become more than tenants. All four Richardson children are drawn to the mother-daughter pair. But Mia carries with her a mysterious past and a disregard for the status quo that threatens to upend this carefully ordered community.

When old family friends of the Richardsons attempt to adopt a Chinese-American baby, a custody battle erupts that dramatically divides the town–and puts Mia and Elena on opposing sides. Suspicious of Mia and her motives, Elena is determined to uncover the secrets in Mia’s past. But her obsession will come at unexpected and devastating costs.

Little Fires Everywhere explores the weight of secrets, the nature of art and identity, and the ferocious pull of motherhood–and the danger of believing that following the rules can avert disaster.

This novel is an amazing gateway and a very engaging read. The story and plot focuses on the complexities of the characters. It also showcases amazing character development till the end page.

Although some readers have argued that the ending is anti-climactic and there is no action or fight at the end. But that’s what makes the end more impactful. As you would expect, this isn’t a murder mystery or a crime thriller, so it reasonable that there is no last battle to find out, who won? Some   characters may choose to give up the fight, as is human nature. Others say that the ending was beautiful and deserving for a good family drama. Overall, Little fires everywhere is as a very fantastic read.

Little Fires Everywhere is less about the actual arson and more surrounds the life of young adults and their relationships with parents. Ng constructs three subplots, each posing a moral quandary regarding a child. 1) Close friends of the Richardsons have taken in a baby abandoned at a fire station, whom they hope to adopt. But the little girl’s Chinese mother has got her act together and wants her daughter back. 2) Years before, Richardson’s tenant, Mia, carried a child for an affluent but infertile couple, after manually inseminating herself with the man’s sperm. Yet she began to form an attachment to the unborn child. 3) The older Richardson daughter gets pregnant by her unwitting boyfriend. Her family could afford to raise the baby, but a child would interfere with her forthcoming university education.

Fire, again and again, serves as a metaphor for renewal and a symbol of the scorched physical and emotional landscape that the Richardsons, and the whole town of Shaker Heights, don’t yet know they’re living on. Tied inextricably into themes of order and disruption, fire symbolizes both loss and the potential for beginning anew.

In a novel where there are no real villains or antagonists, almost all of the malevolence comes from failed or false altruism and the manipulative instincts behind it. In the end, the many manipulations throughout Little Fires Everywhere range from the maliciously cunning to the transparently calculating to attempts at true benevolence. Altruism, or concern for and devotion to the welfare of others, is supposedly at the heart of many of the actions that the characters in Little Fires Everywhere carry out.

Throughout the novel, Ng, again and again, makes the argument that identity is not easily sought or discovered. Her characters struggle to identify themselves internally from one another through the places they were born and raised, the people who raised them and loved them from afar, the families they were given or chose, and the things they were taught as children in opposition to the hard lessons they learned as adults.

Another theme that is prominent throughout the novel is Celeste Ng’s fascination with the complicated nature of mother-daughter relationships. It is evident throughout Little Fires Everywhere. The fathers of the novel are often on the fringes of the action, while mothers and their daughters are brought to the forefront.

The mothers in this novel are shown to need their daughters just as much as the daughters need them. Overall Ng makes the argument that most relationships between mothers and daughters are rooted in longing, dissatisfaction, and an inability to understand one another.

Despite having grown up in an orderly community and within a strict family, the Richardson children inadvertently invite disorder into their lives, embodying a blend of the order with which they grew up and the rule-breaking to which they’re drawn.

Elena Richardson is a third-generation resident of Shaker Heights who writes for the local paper and lives a wealthy lifestyle with her husband Bill Richardson (a prominent lawyer) and four children namely – Lexie, Trip, Moody, and Izzy

On the other hand we have the Warren family. Mia Warren is a photographer who specializes in unique prints. She has lived a transient lifestyle for her daughter Pearl’s entire life. She rents her home in Shaker Heights from Elena Richardson and works as her housekeeper. She also works at a Chinese restaurant. Pearl Warren is Mia’s daughter. She is a sophomore in high school.

While the Richardson children flirt with disorder, the Warren family whose life has always been chaotic aspires to the orderly life of Shaker Heights. After so many years of living a transient lifestyle. Mia and Pearl- a struggling artist and her free-spirited daughter, adjust their behaviour to fit into the community.

As the novel progresses, characters who seemed to have it all together begin to fall apart, and those who’d started in shambles make clear progress towards plans, order, and rule-making. There is a visible theme of disruption vs order involved with the plot.

The novel has a touch of family drama but that’s not where it ends. The story has much more to offer. How outsiders look at you and what might be the reality might be completely different. It’s about self-reflection, catharsis, and judgment on themselves was and who they aspire to be.

The intertwined lives of the characters in this novel feel realistic. The problems that they face, the arguments and quarrels that they have, the help that they should deserve for the mistakes of others, all of it, feels more real than fiction. It is an amazing novel that anyone who loves drama, quiet-kept secrets, and an arson mystery should read.