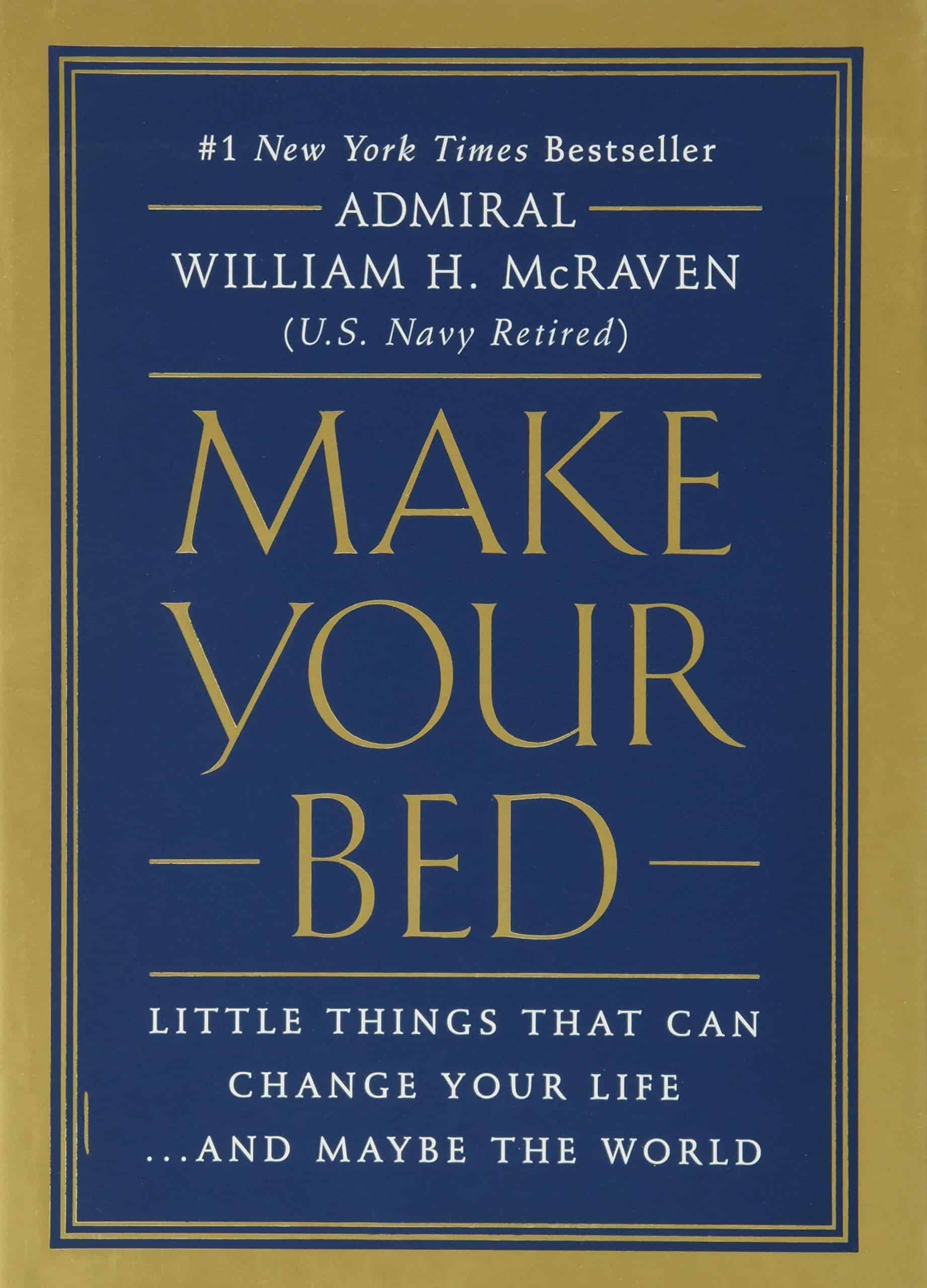 ‘Make Your Bed’ encourages you to pursue your goals and change the lives of others for the better by showing that success is a combination of individual willpower and support. The book can be a motivational one or can be taken as McRaven’s philosophy on life. Anyone who wants to progress in general should read this book.

‘If you want to change the world, start by making your bed.’ On May 17, 2014, William H. McRaven addressed the graduating class of the University of Texas at Austin on their Commencement day. Taking inspiration from the university’s slogan, ‘What starts here changes the world,’ he shared the ten principles he learned during Navy Seal training that helped him overcome challenges not only in his training and long Naval career but also throughout his life; and he explained how anyone can use these basic lessons to change themselves-and the world-for the better. Admiral McRaven’s original speech went viral with over 10 million views. Building on the core tenets laid out in his speech, McRaven now recounts tales from his own life and from those of people he encountered during his military service that dealt with hardship and made tough decisions with determination, compassion, honor, and courage. Told with great humility and optimism, this timeless book provides simple wisdom, practical advice, and words of encouragement that will inspire readers to achieve more, even in life’s darkest moments.

He had learned most of them during his Navy SEAL training, 6 months of runs in the sand, obstacles courses, unending calisthenics, and continuous harassment by veterans, who wanted only the strongest to get to the end of it.  As a cadet, McRaven learned that success doesn’t depend on social status, race, or religion. It’s not how good your parents were to you or which school you went to that determines your future. It’s a combination of the little actions and helps from others that makes people successful. The admiral’s speech went viral on YouTube and later became a book.

The book or rather the speech is amazingly engaging. It showcases the difficulties McRaven went through and the hardships that he had to suffer. But maybe because of those experiences, McRaven could develop his way of thinking. Overall the book never lags and is a very quick read for an adept reader.

The book showcases the following things: Making your bed first thing in the morning can lead to many tasks completed by the end of the day. If you want to change the world, never ring the bell. Find someone to help you paddle if you want to make a real difference in the world. The book can be read by anyone, although it might be impactful for adults, to help them push through their limits.

Make Your Bed is a quick-paced book. It all starts by making your bed and getting to a good start to your day. Find someone to help you paddle: find someone who can rely on you and vice versa. Measure a person by the size of their heart: don’t judge someone based on outer appearance. Get over being a sugar cookie: everyone has difficulties in their lives. Try to be more optimistic. Don’t be afraid of the Circus: don’t get scared of little things. Be prepared to jump: always be ready to jump into ventures head first, but with proper caution. Don’t ever ring the bell: never give up hope and even if you lose a fight or two, remember the war isn’t over yet.

McRaven writes about how making one’s bed in the morning is a simple task that can be done every day, and it will help you accomplish other things throughout the day. He emphasizes this point by referring to it in his title and mentioning it first out of 10 lessons. Although he does not cite scientific research, studies suggest that there are psychological benefits to starting your day with an easily attainable goal like making your bed.

During Charles describes the power of making a bed every day. It has a beneficial effect on other aspects of one’s life, such as budgeting and being more productive. People who make their beds each morning are more likely to be successful than those who don’t. Making a bed is an example of what he calls ‘keystone habits,’ which have a positive influence on other areas of people’s lives. Exercise is another keystone habit that helps people eat better and smoke less frequently. Keystone habits are just small wins that can inspire bigger success. For example, making the bed every day is a keystone habit because it’s easy to do and has symbolic value. It inspires people to keep their rooms clean, which will lead them to be more successful overall.

Life is full of difficult times. But someone out there always has it worse than you do. If you fill your days with pity, sorrow for the way you have been treated, bemoaning your lot in life, blaming your circumstances on someone or something else, then life will be long and hard. If, on the other hand, you refuse to give up on your dreams, stand tall and strong against the odds—then life will be what you make of it—and you can make it great. Of all the lessons McRaven learned in SEAL training, this was the most important. Never quit. It doesn’t sound particularly profound, but life constantly puts you in situations where quitting seems so much easier than continuing. Where the odds are so stacked against you that giving up seems the rational thing to do. This book tells how McRaven helped fight Saddam Hussein. One should read this book motivating you to be better.