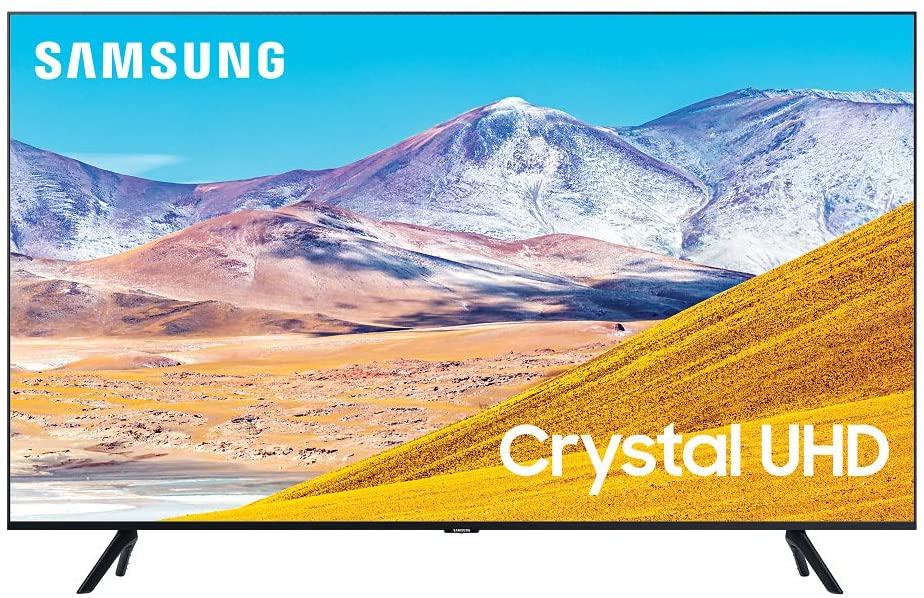 This TV is great at showing content using sharp, crisp and clear pictures. This is achieved using Samsung’s crystal processor 4K, and the crystal display.

For the price, the Samsung TU-8000 Series is a superb 4K TV. It displays crystal clear images without any blur. However, it doesn’t offer very many options when it comes to connectivity and tends to lack brightness when showing HDR content.

4K TVs have a bad rep for being overly expensive. However, there are exceptions that prove that you can get such high-quality tv without breaking the bank.

One such TV is the Samsung TU-8000 Series. Touting Samsung’s Crystal LCD UHD panel technology, this TV shows images with unmatched clarity. It’s also easy to use, has a minimalistic design, as well as built-in voice assistant.

Here’s a brief overview of the features you can expect from Samsung TU-8000 Series.

The first thing you’ll notice is the minimalist design of the TU-8000 Series. It’s constructed primarily using plastic, which covers the back panel and stand. Still, it feels solidly-built and has minimal bezels, giving the TV a sleek look.

That said, it’s important to note that the TV has some pretty wide feet. Depending on the size you choose, this may require a much wider TV stand.

If this is not an option for you, you can choose to mount the TV on a wall. What we don’t like about this approach is that it conceals one of the HDMI ports, rendering it unusable. Considering that connectivity options are already in short supply, this is a massive disadvantage.

The number one reason for investing in a 4K TV is the picture quality, and the TU-8000 doesn’t disappoint on this font.

The TV is fitted with Samsung’s Crystal processor 4K, which converts all the content into a remarkable 4K. Also contributing to the picture clarity is the crystal display. This screen lets you experience ultra-clear colors that have been tweaked, resulting in crisp images.

Another aspect you’ll love about Samsung TU-8000 is the fact that it supports voice assistant technologies. The remote features a microphone, and lets you pick from Google Assistant, Alexa or Samsung’s very own Bixby.

To top it all off, this TV allows you to mirror your PC or smartphone’s screen. You can achieve this through Apple AirPlay, Windows 8.1/10 wireless display option or Samsung’s SmartThings application.

Another feature I was impressed with entails the Ambient mode. This is designed to reduce the backlight and display an array of nature backgrounds, artwork and music visualizations when you’re not actively watching.

Setting up the TU8000 Series for the first time is a cinch. You have the freedom to set up using the remote. However, Samsung recommends users to download the Samsung SmartThings application, which makes the setup a lot easier.

As we mentioned earlier, connectivity is one of the areas where the TU-8000 falls short of our expectations. We’re used to getting at least 4 HDMI ports on most TVs. But the Samsung model offers just three.

It means that once you connect your Blu-ray player, a set-top box and games console, you’ll have used up all your ports. And if you’re wall-mounting your TV, then you have an even smaller number of ports to work with.

On the brighter side, the TV includes several other ports, namely, a composite video in, two USBs, CI slot, an RF antenna and an ethernet port for when your WiFi is down.

As is common with the Samsung brand, there are two remotes included in the package. The first is a chunky, standard-looking remote while the latter has a simpler layout and is more slender.

The second remote has all the functions that you’re most likely to use. These include a ring-shaped D-pad, volume controls, dials to switch the channels, and shortcuts to streaming platforms like Prime Video and Netflix. You can also use this remote to enable voice assistant.

Samsung TU-8000 Series is a 4K TV that offers significant value for your money. It shows bright and clear images and has voice assistant options.

Samsung TU-8000 Series is designed for the homeowner interested in an entry-level 4K TV. It’s part of Samsung’s Crystal UHD lineup, which is slightly inferior to the brand’s QLED models.

Nonetheless, it has a great selection of features, including voice assistant support. Plus, it comes at a price that’s really hard to rival.