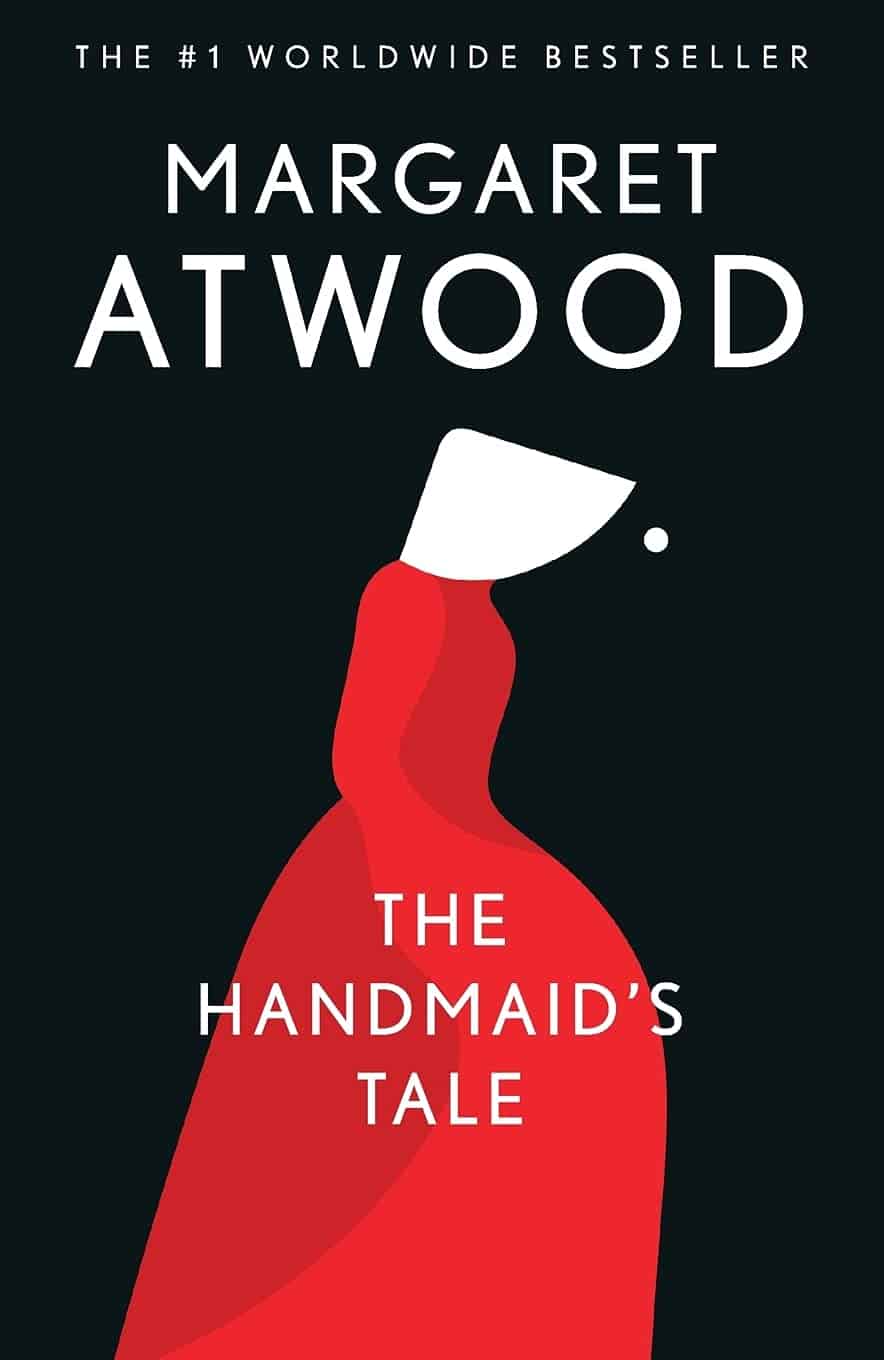 A dark and gloomy story that is set in a dystopian and patriarchal future, this is a good fit for those of you into dystopian classics like V for Vendetta or A Clockwork Orange.

Margaret Atwood's The Handmaid's Tale is a tale of terror as well as a warning. The dystopian future she describes in "Gilead" which appears to be centered in Boston (due to the reference to Mass Ave and the town of Salem) is chillingly misogynistic where women are reduced to strict categories. The Handmaid's Tale is almost physical experience. Consider Margaret Atwood a fearless deliverer of unpleasant news - a messenger unafraid of dishing out the bone-chilling, cruel, unaltered truth and nothing but the truth.

In the Republic of Gilead, Offred is a Handmaid. She is allowed to leave the Commander and his wife’s home once a day to stroll to the local grocery market, where the signs are now pictures rather than words because women are no longer allowed to read. Offred and the other Handmaids must lie on their backs once a month and pray to the Commander to get her pregnant, for in an age of diminishing births, Offred and the other Handmaids are only valued if they are pregnant.

Offred and the other Handmaids are only regarded if their ovaries are viable in an age of dwindling births. Offred recalls the years when she lived with and made love to her husband, Luke; when she played with and protected her daughter; and when she had a career, her own money, and knowledge. But all of that is no longer the case

This book is horrifying and strangely perceptive. It’s brilliant and offers such a thought-provoking experience with a disturbing vision that is necessary to drive the tone and the message of the novel.

Might be a little difficult to understand at first but as soon as that first thing clicks its smooth sailing from there in a wave of good writing, entertainment and thoughts.

In the mid-1980s, near Boston, Massachusetts, a group of right-wing fundamentalists murdered the US president and congressmen, deprived women of their rights by seizing women’s credit cards and depriving them of work and education opportunities, and established Gilead, which is A repressive conservative country dedicated to eliminating homosexuals, abortions, and religious sects other than themselves, and relocating Jews, elderly women, and non-whites in radioactive areas known as colonies. As nuclear and biological warfare has contaminated large areas, the population has dropped sharply and the birth defect rate has risen. As a result, sterile and elderly women and homosexuals were sent to the colonies as cleansers. Women who gave birth to illegal contacts or second marriages were arrested, indoctrinated, and assigned as maids to the commanders of the secret police.

These uniformed breeders live in seclusion and virtual slavery, deprived of their real names and affixed with the names of the fathers of those who control their lives-such as “Of Charles” and “Of warren”. The purpose of these polygamous relationships is to perpetuate the white race, and they fight for hegemony in remote areas. Offred is Luke’s second wife and the mother of a five-year-old daughter who tried to escape to Canada. She was arrested and separated from her family. Her mother, a vocal feminist, disappeared. Almost alone and without friends, Offred was selected as a potential breeder and was indoctrinated at the Rachel and Leah Re-education Centre. The trained maids share a streamlined barracks—just like a dormitory in a gymnasium, surrounded by a barbed wire fence. Reunited with her lively and rebellious university partner Moira, Offred maintained his courage and personality while pretending to follow the instructions of the sadistic armed housewife, particularly Aunt Lydia and Aunt Elizabeth.

The book consists of an introduction, 15 parts (46 chapters in total), and a final part called “History Notes”. This story is told now, interspersed with flashbacks, explaining how Offred’s current situation is formed, and describing in detail the dynamics of her interpersonal relationships. The historical notes partly imitate a seminar on Gilead research. This section explains the previous chapters from a series of recycled cartridges and attempts to verify the information provided.

The subject of this book is suitable for analysis in many sociology courses, including courses dealing with gender, family, power, social issues, and even introductory courses. Power occupies an important position in the whole novel.

The narrator and protagonist of “The Handmaid’s Tale”. Offred belongs to the category of maidservants. Women who give birth are forced to give birth to elite, barren couples. The maids used the names of their commanders, such as Fred, and prefixed them with “Of” to show which commander owned them. Offred remembers her real name, but never reveals that she works at the commander’s house. He established an unorthodox relationship with Offred and secretly played Scrabble with her in his study at night. He often appears to be a decent, well-meaning person, and Offred sometimes finds that she likes him, despite herself, the commander’s wife, Serena worked as a gospel singer in the pre-Gilead era and then as an anti-feminist the activist and crusaders “traditional values.” In Gilead, she sits at the top of the female social ladder, but she is extremely unhappy.

Offred’s best friend in college, Moira is a lesbian and staunch feminist; she embodies the wit and independence of women. Offred encounters Moira working as a prostitute during a club for the Commanders. At the club, Moira seems resigned to her fate, which suggests that a totalitarian society can tyrannize and crush even the foremost resourceful and independent people.

The Handmaid’s Tale offers an interesting and rich way to delve into important sociological discussions. The novel’s themes and questions remain relevant to society. Inspired by the events of the 1980s.
Funny, unexpected, horrifying, and altogether convincing, The Handmaid’s Tale is at once scathing satire, dire warning, and tour de force.