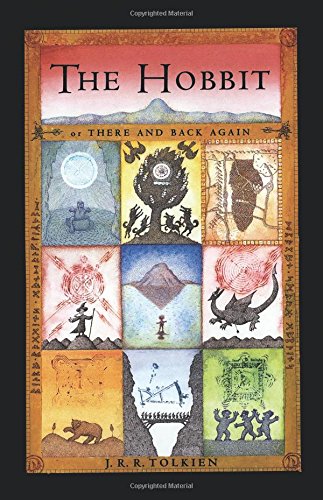 Although Tolkien wrote “The Hobbit” as a story for his children, it is a book that is enjoyed at any age. With its adventurous story, brilliant use of language, and a detailed fantasy world that captivates you the moment you start reading, “The Hobbit” is a highly entertaining and enjoyable novel that is recommended for every fantasy world fan of every age.

Bilbo Baggins is a hobbit who lives very comfortably in his hobbit town, the Shire, focused almost exclusively on reclining in his chair in front of the fire, drinking tea, and eating cakes. This is how it has been every day of his life since he was born. Until one fine day, the unexpected visit of the magician Gandalf and a company of thirteen dwarves alters his life by proposing an adventure: recover the treasure that the evil dragon Smaug guards and restore splendour to the lineage of the dwarf Thorin. As a small and weak creature, Bilbo Baggins first refuses to join the journey, but his weaknesses become strengths when he is convinced to join the journey as a sneaky little thief to reclaim the treasure.

There are few worlds that can compete with Tolkien’s Middle Earth in terms of imagination. Readers would get fascinated with its unique imaginative details if it weren’t for the nonstop adventure or hilarious moments. The novel is a perfect balance. With the greatly developed character, a hairy-footed little hobbit who indeed triumphs, and you have the perfect fantasy adventure. This is the novel that all the fantasy writers followed for centuries.

With “The Hobbit,” JRR Tolkien begins creating one of the most complex universes in the fictional world: Middle-earth from The Lord of the Rings. This novel, which Tolkien wrote for his children, opens the doors to creatures such as hobbits, dwarves, elves, and goblins.

The play tells how Bilbo Baggins, a small hobbit who enjoys the comfort of his home, decides to leave it to embark on an adventure with the company of 12 dwarves and the help of the great wizard Gandalf The Gray. Together, they travel through different regions and overcome numerous obstacles until they reach the Lonely Mountain. In the mountain lies in the ancient dwarf kingdom of Érebor, which has been usurped by the dragon Smaug. As part of his journey, Bilbo finds a magic ring, the unique ring, as the reader will have suspected, thanks to which he escapes more than one mischief.

In addition to its fun and adventure, “The Hobbit” is a kind of catharsis story in which Bilbo, who starts as a coward and a whiner, gradually finds his maturity and courage. It also contains a vindication of Tolkien’s ideology: a quiet, peaceful life focused on personal cultivation and caring for the land is far more beneficial than the longings for power or wealth, which inevitably lead to evil.

Tolkien’s prose is modest and straightforward, taking the existence of his imaginary world for granted and describing its details in such a reality, though often introducing the new and fantastic in an almost casual way. This grounded style welcomes the readers into the fictional world rather than flattering or trying to convince them of its reality. While “The Hobbit” is written with a simple, friendly language, each character has a unique voice. The narrator has his own linguistic style separate from those of the main characters.

These details give an exceptional realism to the novel.

The basic form of the story sets in a mission told in episodes. For most of the book, each chapter features a different inhabitant of the world, some friendly towards the protagonists, while the others are frightening and dangerous. However, the overall tone remains cheerful, interspersed with song and humour. There are many funny moments in the novel, making the story much more enjoyable. These moments are extraordinarily well-balanced and written so that the story appeals to every reader of all ages.

Bilbo Baggins, the protagonist, is a respectable hobbit. During his adventure, Bilbo often misses his comfort at home and wishes he had more food until he finds the magic ring. Gandalf, the traveling wizard, introduces Bilbo to a company of thirteen dwarves. During the journey, the wizard disappears on dimly hinted side-errands, only to reappear at crucial moments in the story.

Thorin Oak Shield, the proud, pompous head of the dwarven company and heir to the destroyed dwarf kingdom under Lonely Mountain, makes many mistakes in his leadership, counting on Gandalf and Bilbo to bail him out. But in the end, he proves to be a mighty warrior.

Smaug is a dragon who plundered Thorin’s grandfather’s dwarf kingdom long ago. Now, it sleeps on the vast treasure.

The plot consists of various other characters of varying importance, such as the other twelve dwarves in the company. There are many fantastic characters such as elegant and powerful warrior elves, men, cannibalistic trolls, evil cave-goblins, giant spiders that can talk, immense and heroic eagles, and evil wolves called wargs. The other essential and familiar characters are Elrond the Wise, Gollum, a strange creature that inhabits an underground lake, Beorn the werewolf, and Bard the Archer, a shadowy but honourable archer from Lake City.

The Hobbit is a classic masterpiece by the great J.R.R. Tolkien. The fantastic yet straightforward story is perfect for all ages who love fantasy worlds. The novel will captivate you when you start reading, and you will finish it in a breath.