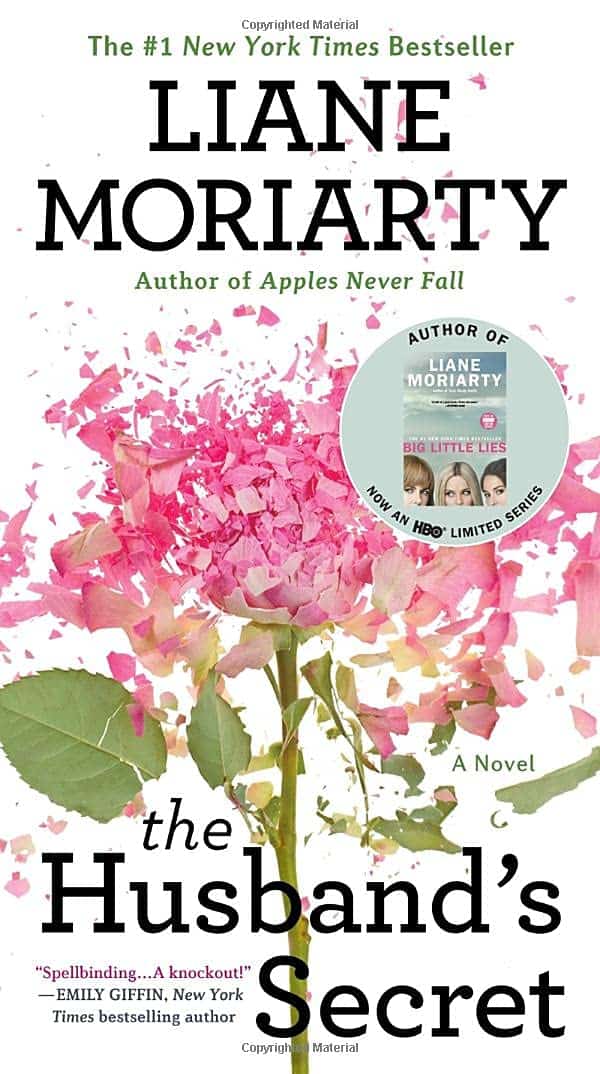 The Husband’s Secret is a different kind of mystery book that does not deal with the secret itself but how it affects the people around it. It has its tense moments and many other emotions, a perfectly written drama that is easy to read with great characters and their social dilemmas.

Cecilia Fitzpatrick is a very successful businesswoman, considered one of the pillars of her community. As a devoted wife and mother, she lives dedicated to achieving perfection: having an intact marriage, three ideal daughters, and an obsessively organized life. Everything goes according to her plan until she, by chance, encounters a letter from her husband, John Paul, addressed to her. The message written on top of the letter indicates that it should be read after John Paul’s death. Intrigued by this warning, Cecilia cannot resist and opens the letter anyway: Dear Cecilia, if you are reading this, then I have died… She continues her reading only to discover that everything she thought she knew about her husband must be questioned, as the letter contains his deepest and darkest secret. Something so terrible and unimaginable that it could shake not only the lives of her family but also the life of their friends and relatives.

In the plot, we find three women, Cecilia, Tess, and Rachel, each with their own personal progress but whose lives intersect in the most paradoxical ways. The internal time of the novel is one week, a Holy Week, specifically, and the chapters are divided between the different days. The first two chapters are slow because we start to meet many characters and their different circumstances, but as of Wednesday, it picks up a rhythm that you can’t stop reading. Although the secret gets revealed before the half of the book, it does not take away the excitement as, by that point, the characters and the effects of the secret get much more crucial than the secret itself.

The most entertaining part of the story is that it offers profound moral dilemmas for many characters that give a dizzying pace to everything. The characters are wonderfully well outlined; it almost gives the feeling when you read them that you have known them for a lifetime. Overall, it is a great story where everyone can relate to a point. The author’s choice of simple language and different narrators make the novel more enjoyable and easier to read.

Many feelings are condensed in the story, many hours of reflections, conflicting thoughts, empathy, and reproaches, a tremendously addictive novel told in the third person by an omniscient narrator, which perfectly combines narration and dialogue. The story excellently doses the suspense, giving the reader a twist; when they think that everything is over, unexpected things happen.

Some of the other topics the story deals with are divorces, second chances in love, the death of a child, the empty nest, and gender roles. As the protagonists face these problems, they guide the plot, getting deeper and giving it a certain twist. It is definitely an original story, a greatly developed drama.

The novel is structured in chapters, which in turn take place in a week, from Holy Monday to Easter Sunday, a whole metaphor about the transience of happiness, about the blows that life gives: On the fragility of principles and morals, on the depth of suffering. It is a quick book to read, thanks to the simple language Liane Moriarty uses. The character descriptions are excellent physically and psychologically, making the reader think they truly know the characters. As a book of moral dilemmas, the development of characters is crucial, which is successfully done by the author. As we saw in Big Little Lies, Liane Moriarty nails the character development excellently by simple but profound descriptions of her characters.

The first to appear is Cecilia Fitzpatrick, a middle-aged woman living comfortably in Melbourne with her husband and three teenage daughters. She is a dedicated housewife, mother, and wife.

John-Paul Fitzpatrick is a middle-aged man who adores his wife and three daughters, is always traveling on business, and is hyper-clueless; that’s why He had forgotten the letter he wrote many years ago, where he confesses something that could ruin his life, and the lives of other people.

The second woman is Tess O’Leary, a woman in charge of her own business, with a husband and a young son. One day she receives horrifying news, so her world is reeling, and in a last-minute decision, she leaves with his son to his mother’s house in Melbourne, where she is reunited with someone from his past.

The third woman is Rachel Crowley, the secretary of the Melbourne school; she is an older woman relatively isolated from the world; the truth is that she is not very interested in what happens outside her home.

Without being a perfect novel, My Husband’s Secret has delighted us with its simple yet profound story. It has made us think, reflect, get into the characters’ skin, each and every one of them, even the secondary ones. It has made us laugh, outraged, saddened, surprised, stressed, and many more. We recommend you to discover what John-Pol hides, how it will affect his family and his community, and third parties, and the final decisions that end up settling the issue.

Absolutely no spam. Unsubscribe any time!