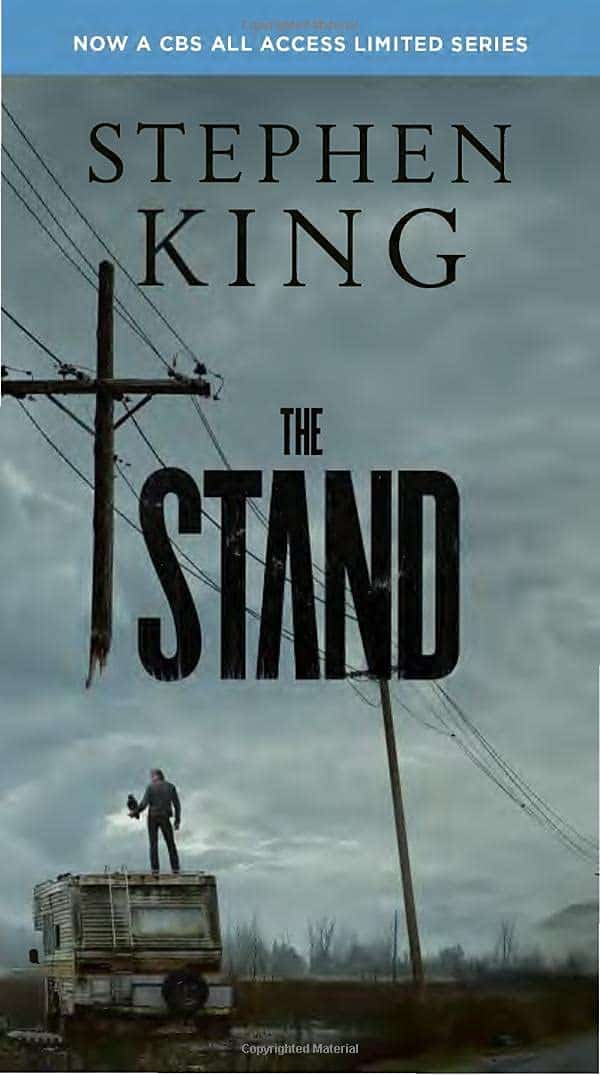 The Stand is simply the best choice for you if you are into compelling storytelling mixed in with gory imagery and a wonderful culmination of different story arcs. It is unpredictable and keeps you guessing till the very last page.

A story of dark wonders and irresistible terror, The Stand is arguably one of the greatest novels that Stephen King has ever written. From horrific imagery to the realistic portrayal of its characters. The Stand is a must read for all those who are a fan of the horror genre.

We have seen the apocalyptic set-up over and over again, but no one comes close to the mighty Stephen King. The Stand is a story set in a post-apocalyptic world after a super flu wipes out 99% of the population. After a man escapes from a bio-weapon facility after an accident; he carries with him the deadly virus which is called Captain Tripps.

This virus poses a threat on the entirety of humanity; rapidly mutating and wiping out most of the world’s population in a mere few weeks. The main crux of the story takes place within a span of just two days; some of the survivors choosing to follow an elderly black woman. While others choose to follow the dark man known as Randall Flagg, who is set up in Las Vegas. More than anything, the book depicts the age-old story of good versus evil with two factions fighting it out in a great and epic final act.

Stephen King never manages to let his audience down. In a simple battle of what is portrayed as good versus evil, he manages to pack so much of action, emotion and brilliant storytelling that stops you from putting the book down. After his initial release in 1978; King came out with a more expanded version of the book comprising of 400 pages which spreads it out and sets up the events brilliantly. What makes the book so entertaining is the fact that the heroes and the villains have been given very interesting stories; steering away from the generic and clichéd storylines of good guy and bad guy.

King himself said that, ‘There’s something a little depressing about such a united opinion that you did your best work twenty years ago’; the majority of the fan base claiming The Stand to be the best out of all the stories he has written.

As mentioned above; The Stand has a rather simple plot. Set in the times of a post-apocalyptic world; The Stand is a story about good against evil. After setting the stage, we get to see the real conflicts slowly begin.

Some of the few survivors who have not been wiped out by the flu have been following a woman who is known as Mother Abigail. She is a 108-year-old Christian woman who is on the side of good and speaks for god. On the opposing side of things we have Randall Flag, a dark man who has a classic cowboy look attached to his tyrannical approach. He is looking to forge a new society on the backbone of torture and dictatorship.

So the stage has been set for these two forces to come against each other and with the usage of brilliant biblical references; the book leads to the simple moment of, The Stand.

The writing is arguably what sets the book apart from others in the same genre. The conflict has been set it up rather early and we have a good sense of what to expect. But despite Stephen King being a master of the horror genre; he manages to change up his writing style scene by scene to elicit different emotions from the readers. From the dark and mysterious depiction of the antagonist that is Randall Flag to the series of short yet terrifying details of the Captain Trips virus; he simply hits the ball out of the park.

He knows exactly when to take foot of the pedal and slowly set the tone and when to steamroll right into the crux of the story and leave us flabbergasted with every little twist throughout the course of the 400 pages. The book’s heroes and villains as well as their individual moments have been written so well, making them some of the most memorable characters from the 20t century.

The characters of Mother Abigail and Randall Flag have been written perfectly. Abigail has been set up as a woman of god and the ultimate hero who leads this community behind her. She is kind and trust worthy and believes in peace to be the way forward.

Randall Flag is the polar opposite. Stephen King did a great job in slowly giving us glimpses of this eerie and mysterious character; but what lies underneath is this vicious need to control everyone around him. His main purpose being to take control of hat is left and rule the world and everyone left in it in any way he seems fit.

Despite a well-rounded cast, there have been some complaints about the female characters in the book. Apart from Mother Abigail, the book lacks many strong female characters since they have all been portrayed as weak. The portrayal of Franny Goldsmith as a woman who has just turned pregnant and constantly needs someone around makes it a bit cliché’. There are also a few subtle comments on how women have been described as after thoughts or simply objects for the men to use.

Some of the relationships are quite problematic with a glaring depiction between the female and male counterparts, but it is the story and the placement of the two leads which makes this a must read.

To sum it up, The Stand is simply brilliant from start to finish. The writing is nothing short of excellent with the horrifying imagery and atmosphere being perfectly built up. The ending is also satisfying and is even more satisfying since it has been slowly but steadily being led up to from the very start. The Stand is easily one of the best examples of how to get an apocalyptic and dystopian story right. It is truly one of the very best stories that Stephen King has given to us.