The Ultimate Hitchhiker's Guide to the Galaxy science fiction book 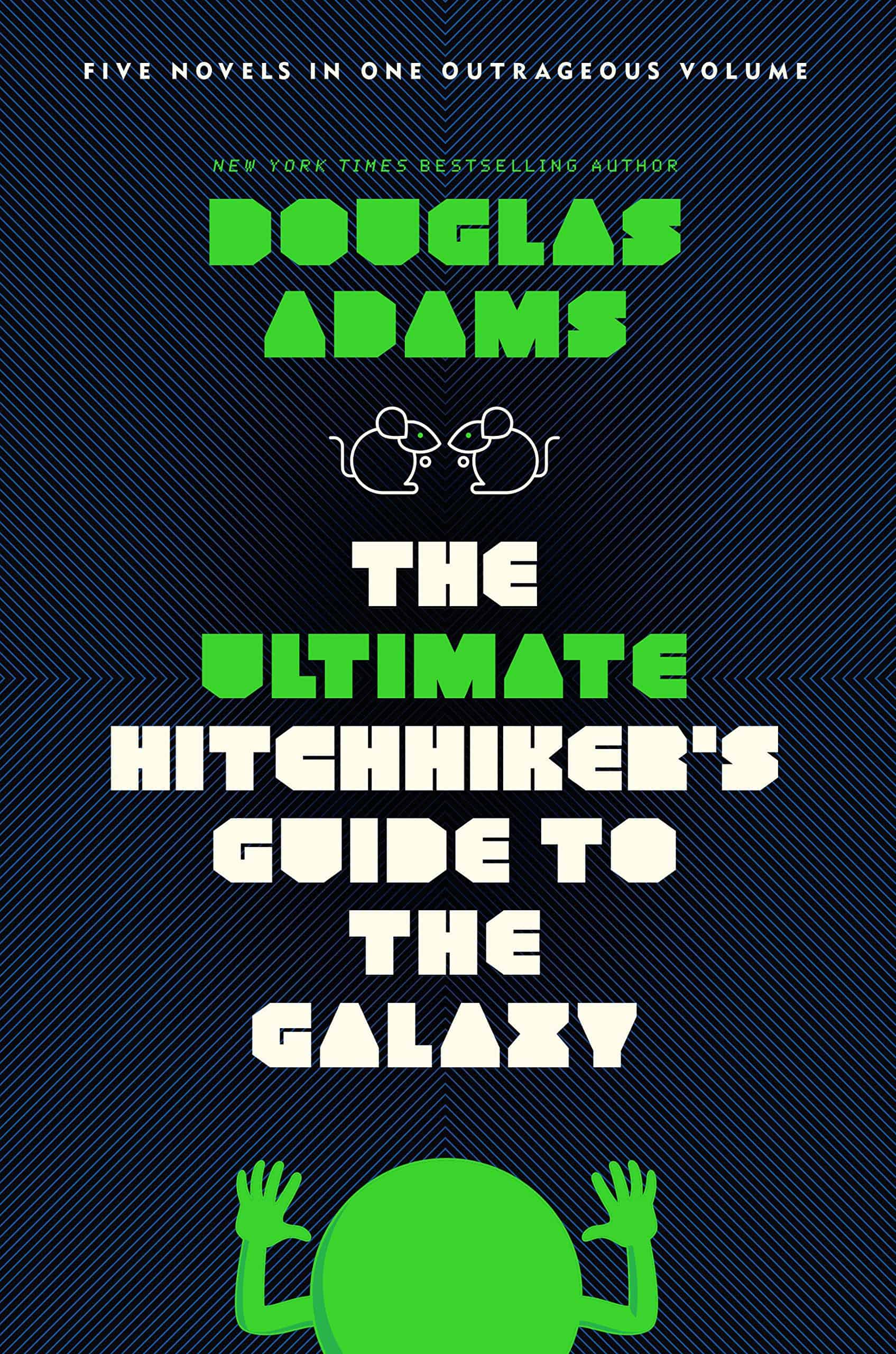 The Ultimate Hitchhiker's Guide to the Galaxy science fiction book

This novel checks all the boxes if you are a fan of comedy and you have a funny bone. Get ready for a long read since this is just the start of a 16 book laugh out loud adventure.

The namesake of the novel is The Hitchhiker's Guide to the Galaxy, a fictional guidebook for hitchhikers written in the form of an encyclopaedia. It is an engaging journey spread across six parts. Anyone who loves alien invasions, crazy conspiracies that come true, or like any sort of science fiction filled with inhuman and amazing worlds, should definitely read this series.

Arthur Dent awakes one day to find a demolition crew outside his house, preparing to bulldoze it down to make way for a new bypass. He throws himself down in front of the bulldozer to try to stop the demolition. Shortly after, his friend Ford Prefect arrives suggests he has something very important to tell Arthur and convinces him to leave his desperate protest and get a drink. Ford is secretly from a small planet near Betelgeuse and works as a researcher for The Hitchhiker’s Guide to the Galaxy, a quirky galactic repository of knowledge.

Ford has discovered that a Vogon Constructor fleet is heading toward Earth to destroy it to make way for a galactic bypass. The fleet arrives, causing mass chaos on Earth. Its leader, Prostetnic Jeltz, announces that Earth has been scheduled for demolition and unceremoniously destroys it. Ford manages to hitch a ride for himself and Arthur on Jeltz’s star ship, where Arthur learns about Ford’s true origins, The Hitchhiker’s Guide to the Galaxy, and the usefulness of towels. A search party soon arrives and takes Ford and Arthur to Jeltz, who doesn’t like hitchhikers. Jeltz delights in watching Ford and Arthur suffer while he reads them his poetry and forces them to critique it. Ford and Arthur’s critiques disappoint Jeltz, and he orders them to be thrown out an airlock. Ford and Arthur are, against the odds, picked up by a star ship called the Heart of Gold a second before they suffocate in the vacuum of space. Will they survive the adventures of the vast universe? Will they be able to find their way back home?

The story revolves around Arthur and Ford, two unlikely alien and human friends. The plot and storyline revolve around the different planets, so everything is known to the characters as well as to the readers. According to some readers, the major plot revels in the first part are very amazing and engaging. Overall, this is a very captivating story.

In the Hitchhiker’s Guide to the Galaxy, a galaxy is a place where seemingly anything can happen. Adams goes out of his way to upend readers’ expectations about storytelling. To do this, he bases one of the novel’s most important plot points on a spaceship that operates according to improbability, impossibility, and coincidence. Although he goes through the motions of explaining how the spaceship’s ‘Improbability Drive’ functions, his explanation relies heavily on unfamiliar concepts that force readers to move through the novel without a complete scientific or even logistical understanding of the very components that drive the story. As such, he plays with the conventional narrative form, challenging the idea that fiction has to be plausible, realistic, or predictable.

He also allows readers to experience the same kind of surprise and disbelief that protagonist Arthur Dent undergoes when he first leaves Earth and learns about aliens. By employing utter absurdity, Adams puts readers in a position of incredulity and scepticism.

One of the major themes in The Hitchhiker’s Guide to the Galaxy is the pursuit of knowledge. Although Adams advocates for an acceptance of meaninglessness in the face of lofty existential questions, he also makes it clear that the impulse to explore such questions—to seek out knowledge—is a natural and inevitable part of being alive. He even suggests that this process of exploration and discovery is often more enticing than the act of actually settling on an answer. For example, the ‘hyper-intelligent beings’ that come to earth as mice are unrelenting in their efforts to understand the meaning of life, such that the very process of inquiry overtakes their aspirations to find definitive answers. There is a philosophical struggle, as the story progresses.

Throughout the novel, Arthur like many others, hitchhikes through space, trying to find meaning in their lives and search for the significance of their existences. As they focus on discerning the meaning of life, though, their happiness decreases, and their efforts to eke out an existential purpose ultimately prevent them from enjoying life.

No matter how hard people strive to understand life, they will seemingly never fully comprehend its supposed purpose. As such, Adams intimates that such considerations often produce little more than unnecessary angst and confusion.

Arthur Dent is a British man who unknowingly escapes the destruction of the earth with his alien friend, Ford Prefect. On the morning of earth’s annihilation, Arthur wakes up with a hangover and learns that his house is about to be destroyed by a construction company. While arguing with the construction foreman, Mr. Prosser, about the project, he is whisked away by Ford, whom he thinks is an average human. However, he learns this isn’t the case when he finds himself in the Vogon alien spaceship as a stowaway. Before long, the ship’s commander, Prostetnic Vogon Jeltz, throws him into space, thereby beginning his journey through the galaxy. Luckily, Arthur and Ford are saved by Zaphod Beeblebrox and Trillian’s spaceship, the Heart of Gold. Strangely enough, Arthur recognizes Trillian, whom he once flirted with at a party on earth. As Arthur travels with this group of aliens, he is at once easy-going and incredulous, accepting his new circumstances even as he struggles to comprehend the wonders of the galaxy.

Characters like Eddie: The Heart of Gold’s main computer, Lunkwill: a hyper-intelligent pan-dimensional being, Deep Thought: a supercomputer built by Lunkwill, Wooden Vranx: the former president of the galaxy, Benjy Mouse, Marvin, and Fook help to further the plot.

Unknowingly Arthur and his group of friends set out to find the ultimate truth of life. In a world full of alien worlds and unforeseen circumstances, the narrative takes them to ‘The Restaurant at the End of the Universe, at the end. Will they find what they were looking for? The novel has some of the finest and amazing details of the worlds that it is set in. The story engages readers not only in the story but in the ultimate query to find the meaning of life. Everyone who loves adventures and science fiction should must read this series.